Bipolar disorder (previously referred to as manic-depressive illness or manic depression)  is a disorder that triggers unpredictable and erratic shifts in moods, energy, concentration, and sometimes even causing difficulties in carrying out the simplest day to day tasks. Depending on the type of bipolar that is diagnosed, it may look a little different for each individual.

There are four types of bipolar disorder and each type has a recommended treatment path. Medical professionals use the pattern of mania and depression episodes to classify every kind of condition.

1. Bipolar I Disorder –  When manic episodes last up to seven days and are severe enough to warrant hospitalization, or they are followed by psychotic actions- those are usually symptoms of Bipolar 1 Disorder. When in these extreme manic or psychotic episodes, the patients may require immediate hospitalization because of the risk of harm to themself or the people around them. Depressive episodes that last up to two weeks are also common. Typically, those diagnosed with Bipolar 1 will experience a mix of manic and depressive episodes – though the depressive episodes are not required.

3. Cyclothymic Disorder – Symptoms that may be less extreme but seem similar to bipolar disorder might be considered Cyclothymic Disorder. This diagnosis is given when one experiences the cyclical mood swings continuously for at least 2 years, but not to the same levels associated with Bipolar 1 and 2. In most cases, this disorder develops during adolescence. Because teenagers are often associated with moody or difficult behavior, sometimes these mood swings are seen as “normal” because they are not severe-  but,  it is important to talk to your pediatrician or qualified medical professional to ensure it isn’t Cyclothymic Disorder.  If left untreated, there is a high risk of the symptoms and diagnosis evolving into bipolar disorder.

4. Bipolar Disorder due to Other Medical or Substance Abuse Disorder — When symptoms are experienced that are not qualified as hypomania or mania, they don’t occur along with depressive episodes, or they didn’t occur beyond 2 years,  they may not be diagnosed as one of the 3 types of bipolar discussed above. This diagnosis requires abnormal mood changes and other criteria and symptoms,  but the cause could be underlying medical issues or even drug abuse.  Therapy is recommended for this situation and seeking help from a medical professional is always recommended.

Take our depression quiz to help better understand your situation.

Managing bipolar disorder is usually most effective when working with a qualified professional or a support team to identify a personalized and holistic treatment plan. This plan is likely a combination of one or multiple types of therapy and medication that can assist in reducing the symptoms of bipolar. If you have bipolar disorder, it is important for you to consult qualified medical professionals that can help you safely identify your different options for prescription drugs as well as therapeutic options that can help you control your symptoms. Finding the right treatment plan has shown to be effective in  reduction of the unpredictable and extreme manic and/ or depressive moods you may experience.

It is vital to seek help from qualified medical professionals as soon as you or your loved ones suspect that you may have any mood disorders. Bipolar disorder, which was formerly termed as manic depression, is a mental condition that leads to abnormal and extreme swings in your moods and behavior. Some of the areas that may be affected include:

Bipolar treatments work towards stabilizing these and additional elements to prevent the extreme depression or mania as well as other effects of bipolar. With proper treatment, you can operate normally and live the happy and fulfilled life you want to live. 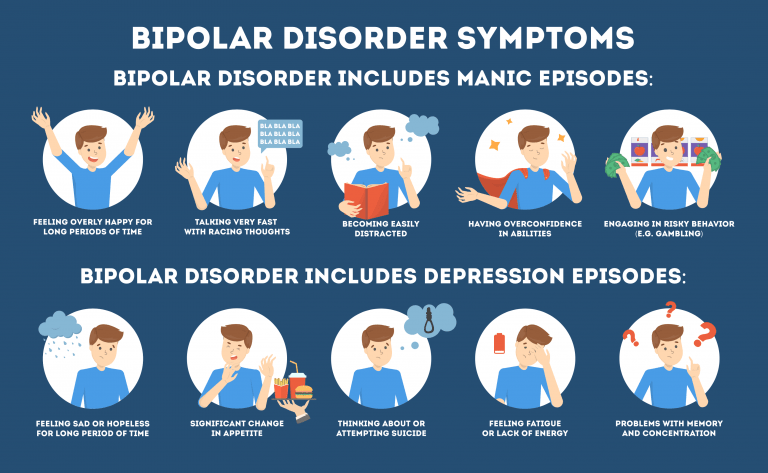 There are various treatment options for all of the different types of bipolar and the best options for you  will depend on your condition and your specific needs. A qualified professional or a team of professionals can determine the best treatment plan for you and usually a holistic approach is the preferred method. Some of your options may include:

There are various medications used to treat bipolar disorder. The dosage and specific types of these medications are prescribed according to your observed symptoms. Some of the commonly prescribed medications include:

You may need a combination of all of these medications or just one or two. The process of finding the right meds will be very personal and may be an ongoing journey.

It may be challenging to live a stable life with bipolar, but early diagnosis and proper treatment are beneficial because the symptoms can be lessened or maybe gone completely in some types of this disorder. A skilled mental health professional can ask the right questions to make the diagnosis and lead you on your recovery journey.

At BasePoint, we believe a holistic approach is your best choice and we can help you find your treatment plan. Once we do, sticking to your plan is crucial. We care about you and we do our best to ensure that our clients walk away as the best version of themselves. Feel free to reach out to our experts today so we can discuss your options.

Our Commitment To You

At BasePoint Psychiatry and Wellness we are committed to providing the highest quality treatments utilizing evidence-based principles in a family-oriented, safe environment.

We are proud to be recognized as a premier provider of Psychiatry, Telepsychiatry, Counseling, Depression Treatments and Teen Treatment. We are here to support you as part of your healing journey.